Our Journey In Time

This selected reserve was created in honour and respect on the prestigious occasion of Late King Birendra Bir Bikram Shah Dev's Coronation ceremony in 1974 and names it as Coronation Khukri.
‍
It is packed in a unique bottle shaped like a Khukri, which is a national symbol of pride, bravery and elegance. As one of the honorary guests invited to the ceremony, we gifted the first Coronation Khukri to the King in his honour. 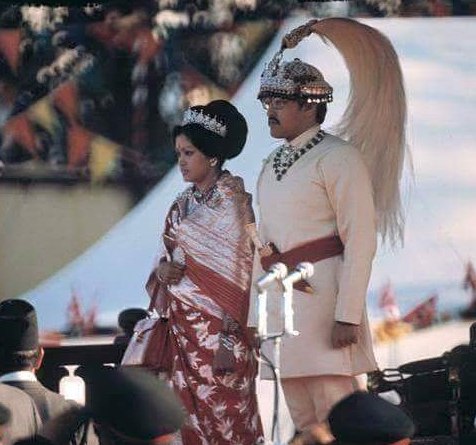 His Majesty, Late King Birendra Bir Bikram Shah Dev, eldest son of the King Mahendra, started his reign after the death of his father, in the year 1975. He was heir to the world's only Hindu throne and is tenth in the dynasty of the Shah kings of Nepal. Growing up, his father always taught him about his duties as a son and the future heir to the throne. “ Son, my duty is to surpass the honour of the family name. I am here to advise, using my experiences that I have gained, throughout my lifetime. Do not repeat my mistakes, rather, make your own”. He explained, with love. "It is not only the family name on the line but that of the entire country”. Words that stayed with King Birendra forever.
‍
He could barely get through mourning his father’s death when he had to take over the responsibility of his country. He always knew, like any other son, there would come a day in his life, where he would have to take his father's place, as a ruler. He just did not expect to do this in the absence of his father. He always imagined his father passing down the crown, when the day was right. Now, it had to be done by the priest.
It was the dawn of 4th of February 1975, his attendants performed the bathing ritual, from the pure water of the river, meant to purify the heir before the ceremony, called ‘Rajya-abhisheka. He was then driven to the temple of his ancestral palace, the Hanuman Dhoka. There he was smeared with mud taken from various symbolic places - the bottom of a lake, the tusk of an elephant, a mountain, the confluence of two rivers etc. This celebration symbolized the King's awareness of his land and closeness to his people.
‍
He is known as the reincarnation of Vishnu, the God of preservation as well as King of Kings, the five-times Godly, Valorous Warrior, and Divine Emperor. Along with Crown Princess Aishwarya Rajya Lakshmi Devi Shah beside him, he was cleansed with butter, milk, yoghurt and honey as priests chanted praises and salutations by the four major castes. 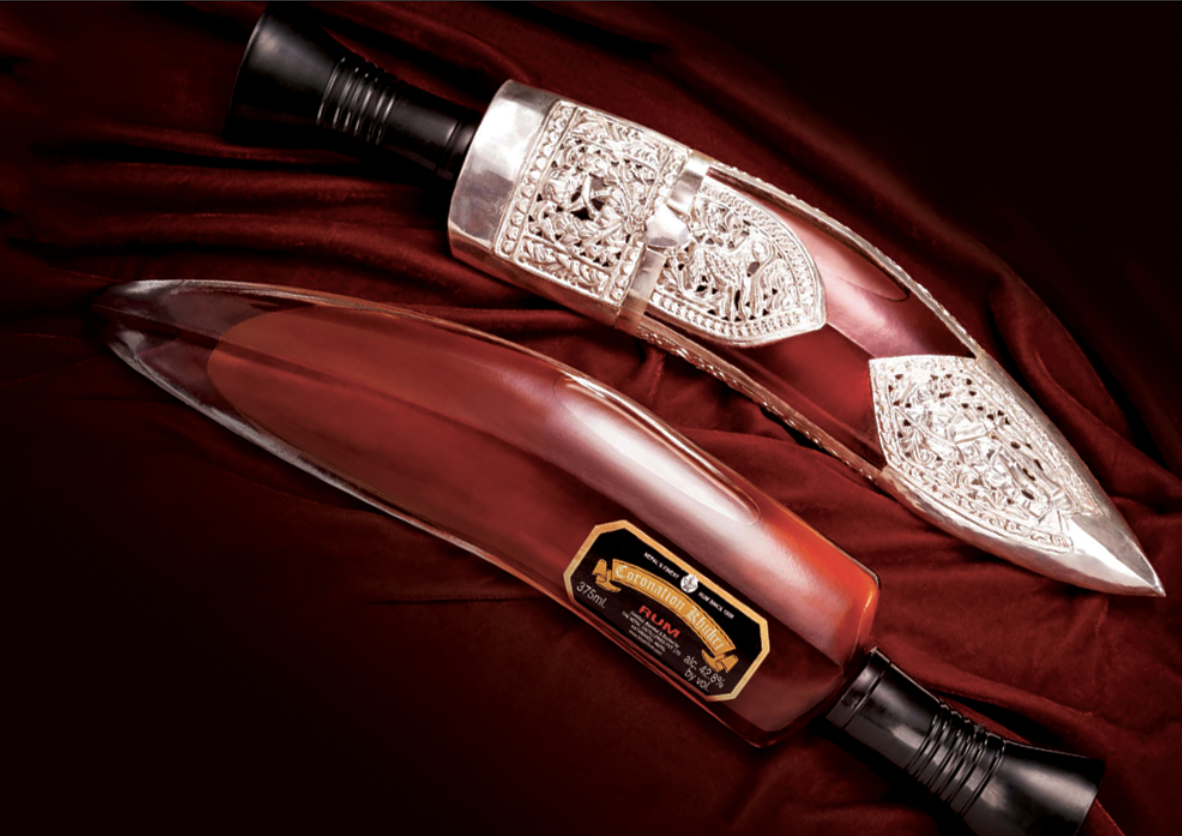 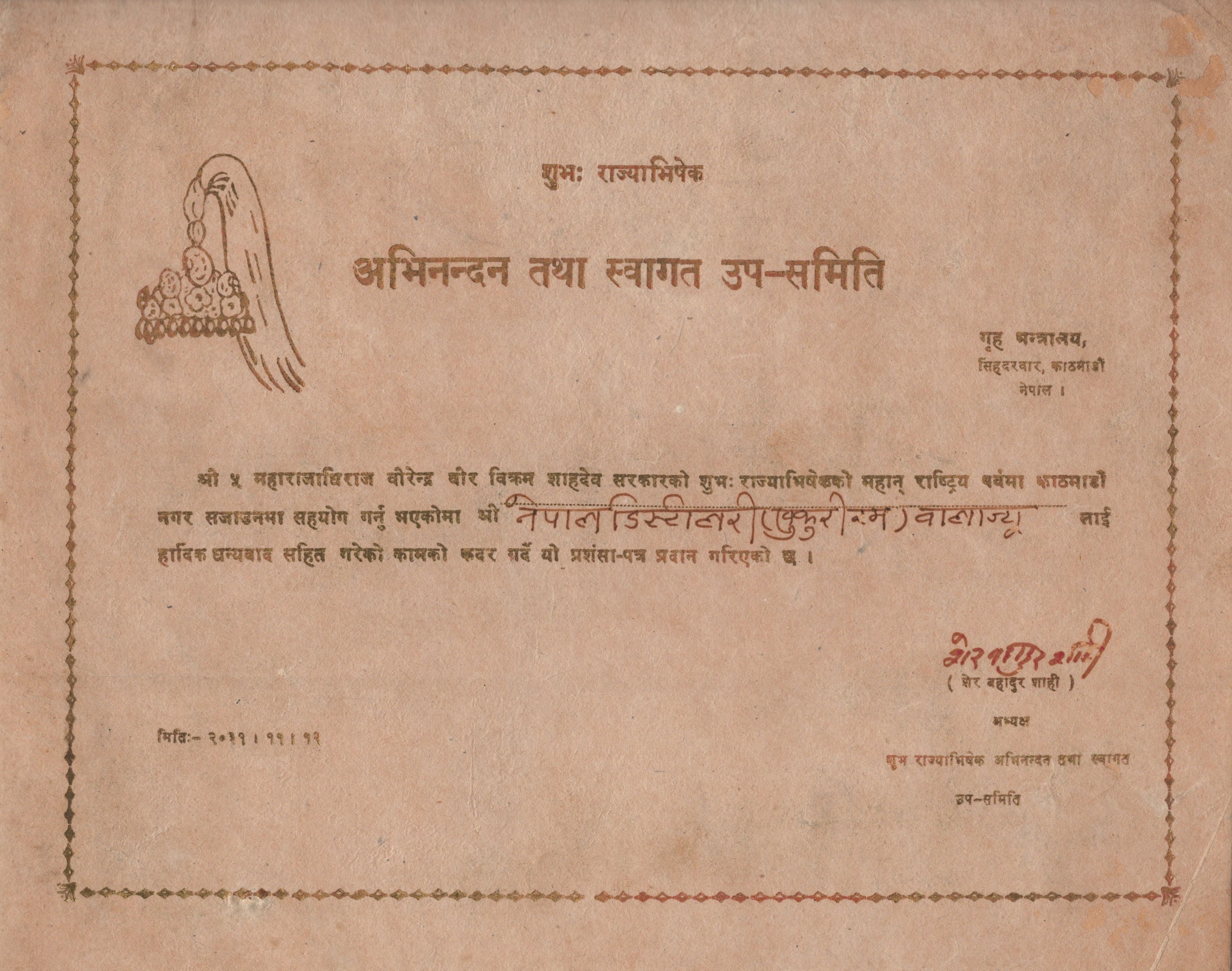 Appreciation Certificate from the home ministry of Nepal, received in appreciation of Nepal Distilleries support for King Birendra's coronation ceremony.

King Birendra, who was educated at Eton and studied briefly at Harvard and Tokyo Universities, majored in political theories, reigned as an absolute monarch, as he inherited a country where political parties were banned and he ruled through a system of local and regional councils known as panchayats.
‍
The King announced that he has ordered his government to make primary education available and free for every child. He also announced the Nepal Zone of Peace proposition during his coronation ceremony reception. He formally asked the international community to endorse his proposal that the United Nations should declare Nepal a ZoP, to give a new dimension to the Nepalese stance for the non-aligned movement.
King Birendra Bir Bikram Shah Dev flourished from 1972 until 2001. He was described as one of the few Nepalese monarchs who wanted the Nepalese people to experience real democracy. Some historians have speculated that King Birendra's democratic views and simple nature led to the success of the People's Movement I. He is also credited for introducing SAARC in Asia to strengthen the foreign relations of Nepal with the other South Asian countries. During his reign, Nepal was opened up to extensive tourism, which still today carries back Khukri Coronation rum as a souvenir for friends and family.
This coronation ceremony of His Highness Birendra Bir Bikram Shah Dev was attended by Britain's Prince Charles and Earl Mountbatten; Crown Prince Akihito of Japan; the Governor-General of Australia, Sir John Kerr; the Presidents of Sri Lanka and Pakistan, William Gopallawa and Fazal Elahi Chaudry; and the vice president of India, Gopal Swarup Pathak. At the ordained time, he was honoured as a King with an emerald green crown encrusted with jewels and adorned with feathers from a bird of paradise. The exotic crown is said to be worth two million dollars and was placed upon his head at the exact moment set by court astrologers.
‍
King Birendra was also an art collector and supporter of Nepalese craftspeople and artists and learnt to fly helicopters. On this prestigious occasion, Khukri created this selected reserve of Khukri XXX Rum - named as Coronation Khukri. It is served in a unique bottle shaped like a khukuri, which is a national symbol of pride, bravery and elegance. As one of the honorary guests invited to the ceremony, we gifted the first Coronation Khukri to the King in his honour.

Heritage of the Nepalese Gurkha

Birth child of the Himalayas 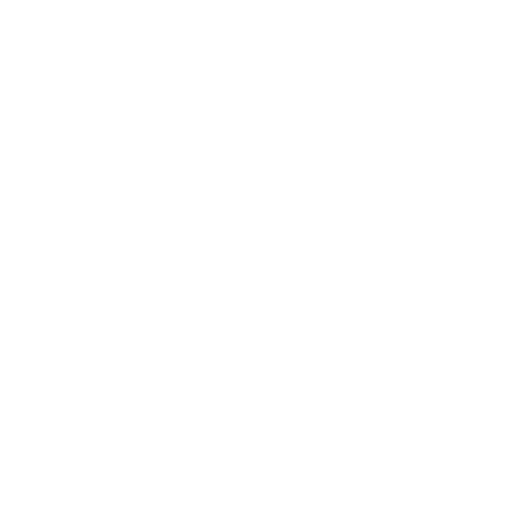 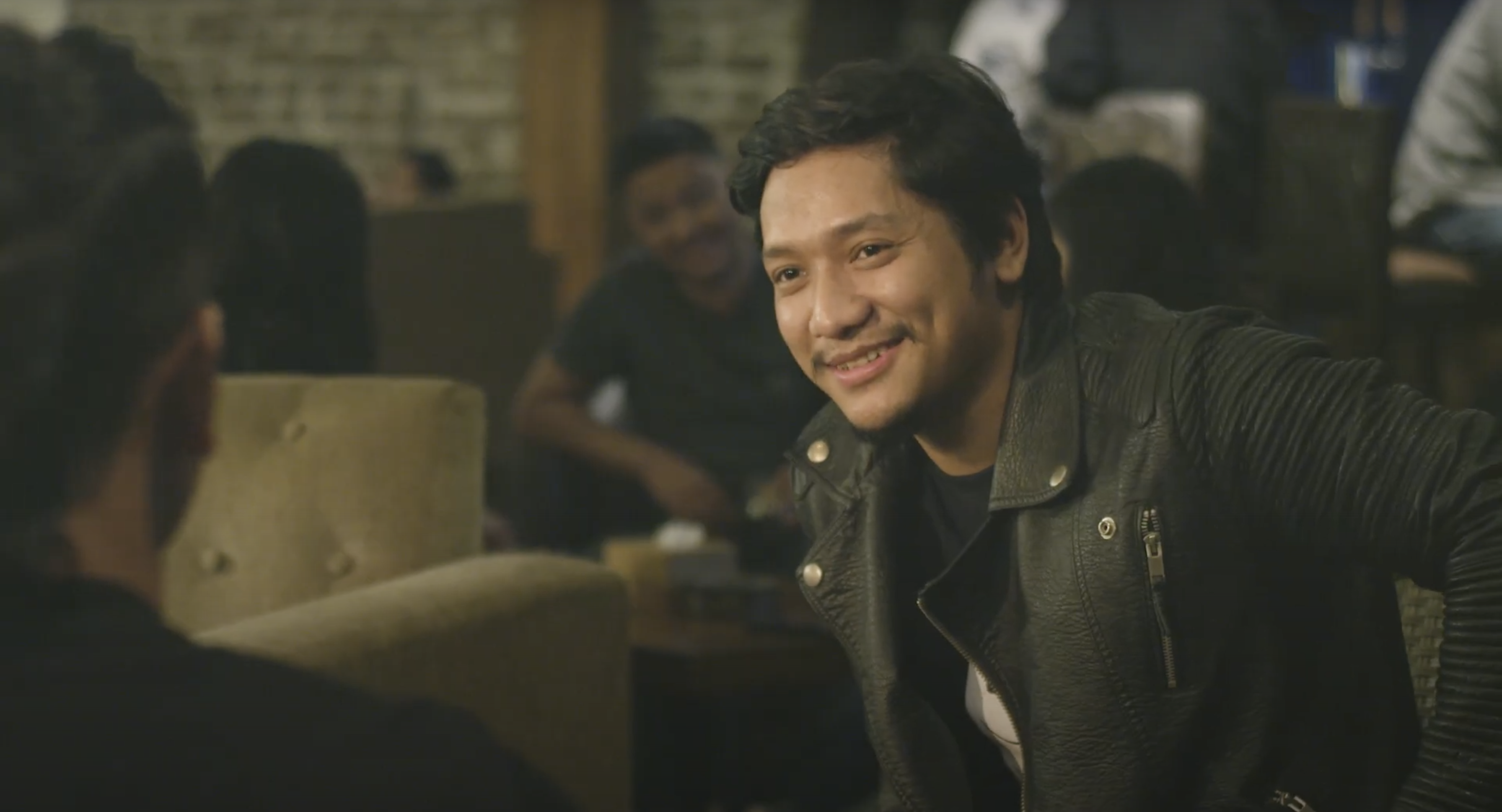 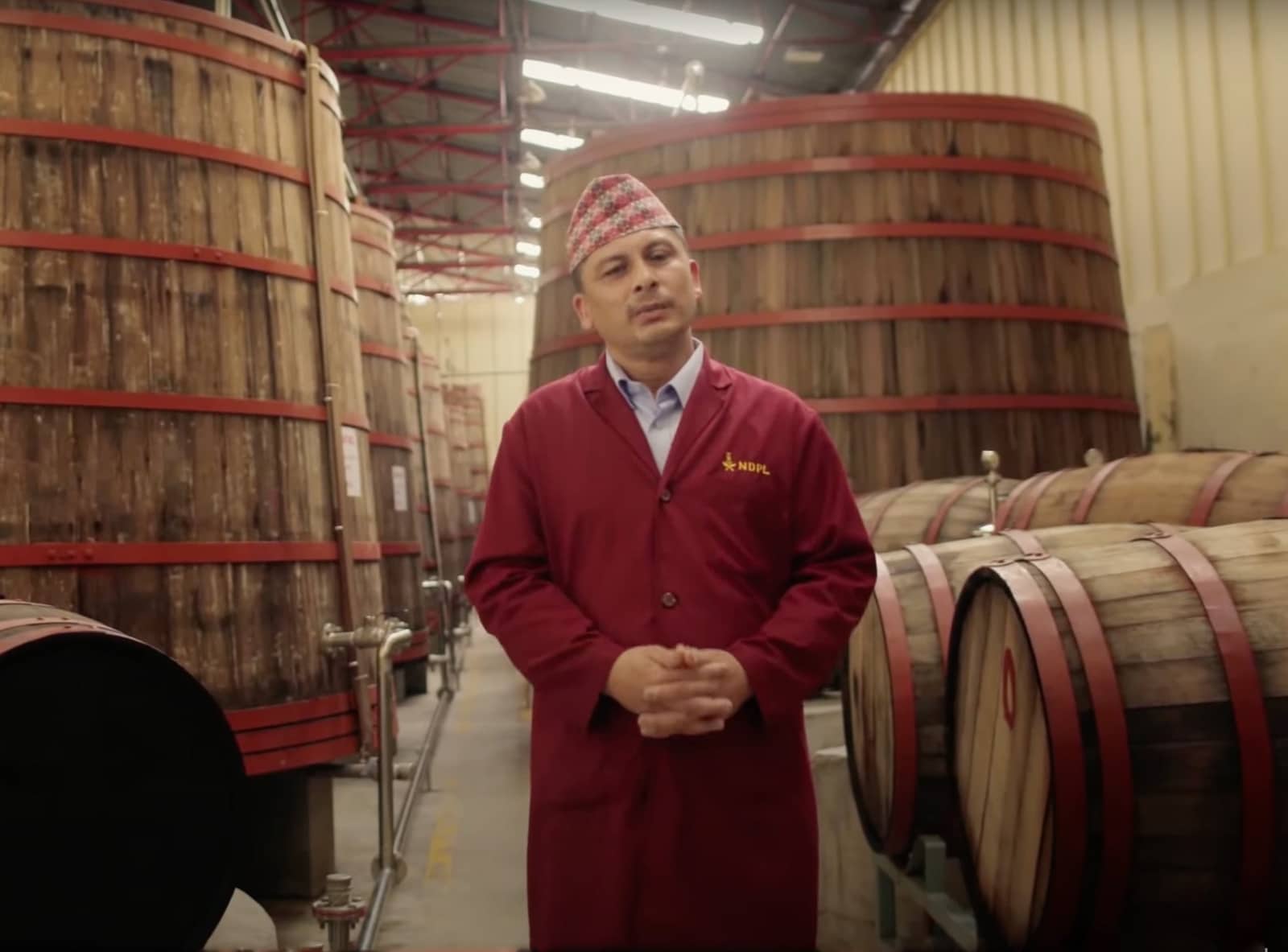 Every drop of Khukri Rum is filled with rich history of Nepal and the innumerable people who have contributed to its heritage.

A symbol of Nepalese pride, the new pack has straight, proud sides, and a bespoke flared cap, echoing the handle of the iconic khukri knife.

From heritage and craftsmanship, to beauty, creativity and an uncompromising commitment to excellence, Khukri draws from and is inspired by the decisions, stories and people who have shaped it.

Come visit us at Nepal's oldest operational distillery to witness first hand, how we make the world's best Himalayan rum.

By clicking "Accept", you agree to the storage of cookies on your device for site navigation, analyse site usage, and assist in our marketing efforts. Read our Privacy Policy to know more.